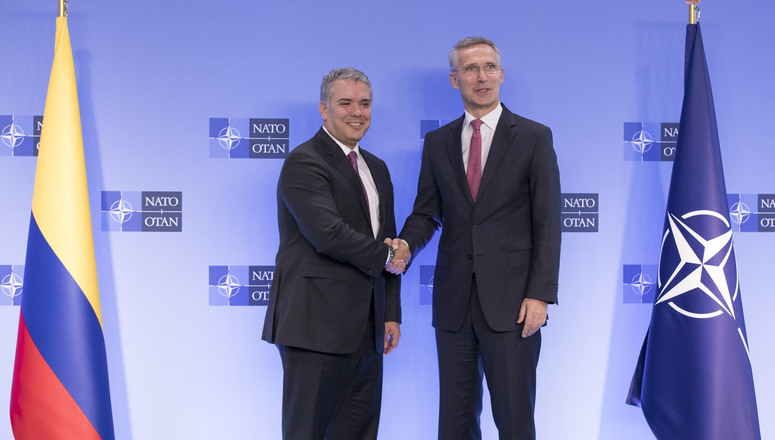 The government of Colombia is one of famed colonizer Christopher Colombus. With a settler-colonial government ruled by the white landowning elite, Colombia is similar to Brazil and Argentina as well as to amerikkka.

Mao’s quote, “political power grows out of the barrel of a gun” is shown materially in Colombia’s political history. It was this day in 2013 that Colombia started talks with NATO to secure a seat at the table. Political violence against the white power republic, such as la violencia of 1948, was waged by rural coast dwellers of African and First Nations people seeking to overturn colonial capitalism in the form of NATO.

In the 1950s, Colonizer-in-chief Laureano Gómez sent a battalion of Colombian soldiers to the Korean peninsula to fight alongside amerikkkans against Korean revolutionaries led by the Workers Party of Korea. This pro-imperialist stance ensured the loyalty of the Colombian Republic to the u.s./NATO imperialist project.

In 2013, Colombian president Juan Manuel Santos understood this colonial contradiction and plotted to disarm the revolutionary armed force of Colombia (FARC). NATO, the settler-colonial bloc of imperialists, recognized these peace deals as a win for white power.

Peace talks began at the center of the 2014 presidential election, which Santos won in a June runoff after capturing 51 percent of the vote to defeat Oscar Ivan Zuluaga. The start of said “peace” talks led Santos’s popularity to spike to roughly 60 percent approval.

Attacking Santos, other famed capitalist-colonialists such as Uribe and his uribistas dealt heavy criticism to him for not using direct colonial violence against the FARC. Uribe was even responsible for receiving CIA cash from white nationalist George W. Bush. The Colombian state wanted outright warfare, but Santos took what appeared to be a peaceful road.

The western world’s morality was leveraged against the FARC revolutionaries to demand less violence. But at the same time, similar to France’s reaction to Haiti, Colombian colonizers used violent tactics to gain power over the revolutionaries.

The final peace treaty between the government and the FARC had not been consummated by the agreed-upon deadline on June 23, 2016. During this time NATO permitted Colombia to submit their bid to become a full global partner as a reward for their work in colonizing the masses of workers.

Continuing today, even during the global Coronavirus pandemic, Colombia is willing to participate in imperialist scheming by being an active antagonizer of Venezuela. Since disarmament, the President Ivan Duque has overseen many assassinations and kidnappings of African and indigenous FARC leaders

We as anti-colonial revolutionaries must understand that cooperating with a state founded upon looted Indigenous land and forced migration and enslavement of African people has absolutely zero moral authority.

Our revolution will bring about freedom and liberation from settler colonialism and the violence colonialism breeds by enforcing capitalism upon the people.