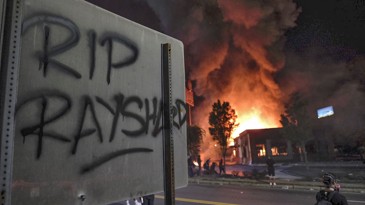 Twitter has, once again, done the job of the pigs.

Just a few days after the lynching of Rayshard Brooks in a Wendy’s parking lot, the internet was awash with news of that same Wendy’s being set on fire as an act of retaliation.

Almost like clockwork, African and Colonized people on social media sunk back into a now familiar conversation. A conversation of so-called ‘legitimate,’ peaceful protesters being sabotaged by outside agitators.

After the June 13 blaze, Twitter mobilized an entire intelligence campaign to sniff out one of these “outside agitators.” As if colonized people couldn’t possibly be overcome with rage against this system, against the genocides of their people happening every day, as if lashing out against that system was not a legitimate response in a protest.

What was the result of this snitch campaign?

On June 20, the Atlanta Fire Rescue department issued a warrant for Natalie White, a white woman, and the girlfriend of Rayshard Brooks, as a suspect in the fire.

Our innocence will never be enough

It is important to point out what happened immediately after Black Twitter snitched on Natalie White. Not one, but two Colonized people were charged with setting fire to a pig vehicle, and are now facing up to 45 years in prison.

Colinford King Mattis, 32, and Urooj Rahman, 31, are sitting in jail cells as we speak, charged with attempting to burn an unoccupied, already damaged pig vehicle.

The state has done a very good job of convincing many of us of the narrative that there are both “good” and “bad” protesters involved in these recent uprisings.

Natalie White is facing years in prison after Twitter detectives widely shared her picture. Two more allegedly “bad” protesters, Colinford Mattis and Urooj Rahman, are put into concentration camps, under the threat of more pig violence, and infection from COVID-19, and all for property damage.

The amerikkkan justice system was not designed with justice in mind for Colonized people. It is a tool to incarcerate us, kill us, and suck our lifeblood; just like every other white nationalist institution in the heart of the colonial empire.

Colonialism does not give a damn about who burned down one dirty ass Wendy’s. Colonialism cares about criminalizing Blackness, and brutalizing Colonized people. Period.

The system will create divisions amongst colonized people to make the pigs jobs that much easier. There is no distinction between “good” protesters and “bad” protesters.

In white nationalist amerikkka, all colonized people are guilty for no reason other than the fact that we exist. There is no amount of begging, rational argument, or proof of innocence we can give our oppressors that will convince them to stop killing us.

The only thing that will stop them from killing us is worldwide revolution led by poor and working class colonized people.

Snitches have no place in that revolution!

African and colonized people can only be harmed by cooperating with the pigs. Even if these uppity snitches on Twitter aren’t getting paid by the state, they just proved that they are willing to do pig work for free.

The land they walk on was taken by violence, and no amount of cooperating with that violence will get our people free. Poor and working class Colonized people can only take the land back back by force, and we are justified to do so by any means necessary.