What are Israel’s plans amidst the COVID-19 pandemic?

In the midst of the COVID-19 pandemic, the settler colonial state, Israel, is making an attempt to illegally annex the West Bank and steal more land from the indigenous Palestinian people.

Israel’s Prime Minister, Benjamin Netanyahu, and his former opponent, Benny Gantz, have signed a deal which includes plans to annex the Jordan Valley and the Israeli settlements in the West Bank beginning July 1st.

Even by the standards of the United Nations, an arm of u.s. global hegemony , this would be breaking international law.

To no surprise, the United States, which is a settler colonial state itself (and has given well over $140 billion dollars to Israel over the years), is welcoming this deal.

For the past two months, Netanyahu has been taking advantage of the COVID-19 crisis to tighten the hold over the West Bank, increasing surveillance of Palestinians by demanding those awaiting permits of any kind to download an app that will give Israeli Defense Forces (IDF) access to their personal information, including location and contacts.

IDF presence in the West Bank has always terrorized Palestinians, and throughout the pandemic, their militarization has become even more aggressive, arresting the Palestinian Authority’s Jerusalem Affairs Minister, Fadi Al-Hadami, and Adnan Ghaith, the Palestinian governor of Jerusalem, under false accusations of taking part in “banned political activity.”

In reality, the two “were arrested for taking measures that the Israeli authorities are not taking themselves to ensure that the [COVID-19] spread in East Jerusalem communities is contained,” according to Rania Muhareb, a legal researcher at the Palestinian NGO Al-Haq.

This escalation of attacks is targetting not only officials, but also Palestinian healthcare workers and other regular civilians living in the West Bank. During the first three weeks of April, B’Tselem, a human rights organization, documented 23 Israeli state-backed settler attacks against Palestinians.

Aside from these cases of physical assault on Palestinians, there have also been torched cars, stolen livestock, uprooting of crops, and home demolitions.

How Israel is terrorizing Palestinians in the time of COVID-19

While early on in the pandemic Israel had remained apathetic and taken no actions to keep the five million Palestinians living under its control safe, now the settler colonial state is intentionally going out of its way to destroy or confiscate any relief Palestinians are able to come up with.

There are multiple instances of volunteers being detained for sterilizing facilities and streets in occupied Jerusalem, and on one occasion, Israeli forces resorted to the use of arms to make volunteers trying to raise awareness about virus prevention leave the city.

The headquarters of the Palestinian emergency committees have been raided and Israeli forces have assaulted committee members as well as field team volunteers in Hizma village (a Palestinian town in Jerusalem).

Similarly, 3 Palestinians were arrested in Sur Baher, another village in Jerusalem, and the 300 parcels of food they were distributing to families in need were confiscated.

In March, Israeli forces bulldozed a makeshift clinic set up by Palestinian organizers for COVID-19 medical treatment, as part of the state’s demolition routine. 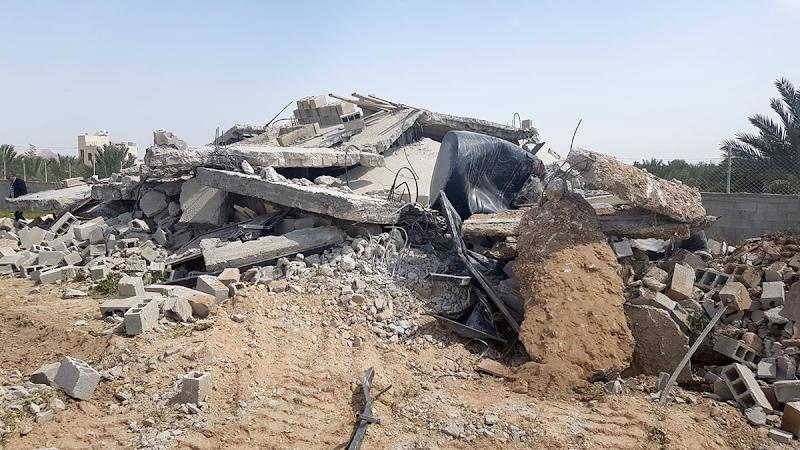 Leftover remains of a demolished clinic

All of these inhumane actions are on par with Israel’s acting genocide against Palestinians, deliberately brutalizing, starving, and restricting medical care from them.

Throughout these past two months, a total of 357 Palestinians, including 48 children and 4 women have been arrested by Israeli occupying forces.

Palestinian political prisoners remain the most vulnerable population to COVID-19 in Israel, with the Detainees Commision stating there are around 700 incarcerated Palestinians who are sick.

One formerly incarcerated Palestinian, Noureddine Sarsour, had tested positive the day after being released, and claims he interacted with about 30 to 70 prisoners during his two-week detention.

Sarsour explained that prison authorities did not enforce social distancing and ignored prisoners’ pleas to place any new prisoners in a 14-day quarantine before letting them in.

To make matters worse, the Israeli Prison Service (IPS) has removed access to essential items like sterilization tools and cleaning products from prisoners, stopped allowing the Palestinian National Authority from donating money to prisoners, and banned prisoners from phone communication with family.

Of the 5,000 Palestinians in Israel’s prisons, there are 180 children, 41 female prisoners, and 700 who are chronically-ill. Since 1967, the beginning of the Israeli occupation, 222 Palestinians have been killed in Israeli prisons.

Michelle Bachelet, UN High Commissioner for Human Rights, has called for the release of “every person detained without sufficient legal basis, including political prisoners, and those detained for critical, dissenting views.”

Every Palestinian incarcerated by the false state of Israel is a political prisoner. Their sentence is for speaking up against the theft of their land by a colonial regime.

From throwing rocks to spreading health safety information to the colonized people, anyone who dissents against the settler-colonial Israel risks being locked away or killed.

We are in full support of the abolishment of Israel and the liberation of the Palestinian people!

From Philly to Palestine, Free Them All!

Decolonize yo Diet; a Nigerian bust down!