‘Gender reveal parties’ are a capitalist money-grubbing scam. They were created by corporations in an attempt to revive the holiday industry, which like many industries, is dying as capitalism progresses to its late stage. This, by itself, is reprehensible enough: to urge the working class to participate in extraneous capitalism, bombarding them with the idea that they’re not doing enough for their loved ones unless they do so. I type this on Valentine’s Day, one of many holidays created for this purpose. Fuck celebrations of capitalism; we should celebrate February 14 as the day in 1779 that the indigenous people of Hawaii defended their land by killing the white settler colonist Captain Cook – but I digress. Compelling the proletariat to consume even though they do not have the means to do so, and then telling them they’re ‘lesser than’ when they can’t is despicable enough on its own. However, with gender reveal parties, there’s another level of harm; a reinforcement of the gender binary, and in turn, violent transphobia. 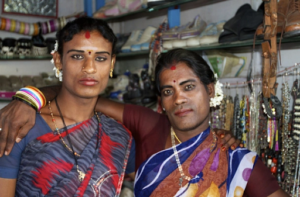 The gender binary is a false notion introduced to societies by settler colonialism. It goes hand-in-hand with other oppressive systems such as cisnormativity (the idea that everyone is cisgender by default) and patriarchy. We know this by looking at history. Before colonization and even now despite genocide, gender variation existed/exists in societies all over the world. Genderqueer and transgender people existed/exist under many names including the two-spirit people of indigenous First Nations, the Ashtime of the Maale people in Ethiopia, the Hijra of India, the Muxe of Mexico, the Māhū of Hawaii, the Xanith of Oman, the Mangaiko of the Mbo people in the Democratic Republic of the Congo, the Nádleehi gender spectrum of the Navajo tribe, the Ihamana gender spectrum of the Zuni tribe, and countless others. Ancient Egyptians recognized third gender thousands of years ago. In the indigenous religion of Korea, the mudangs (shamans) are considered inherently trans, as they are possessed by momju (gods or spirits) of various different genders. The Dogon tribe in Mali worships Nommo, mystical creatures reverently referred to as “The Teachers” and described as intersex and androgynous.

Cisnormativity is the colonial idea that everyone is cisgender, i.e. they identify with the gender they were assigned at birth. It goes hand-in-hand with transphobia. Transphobia is not a war of ideas. It is physical violence that led to the murder of 23 trans women (the overwhelming majority of them African) in the U.S. and the murder of 331 trans and gender-diverse people worldwide, in 2019 alone. It is the reason that black trans women in the U.S. have a life expectancy of 35. 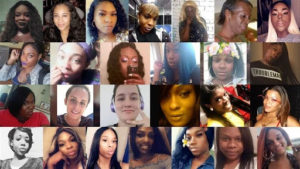 To invent a corporate holiday that perpetuates transphobia on land soaked in the blood of indigenous people and built on the backs of Africans stolen from their land and forced into slavery – all societies that had a beautiful wealth of genderqueerness and non-conformity before these genocides occurred – is the utmost insult added to the highest injury.

It is clear that gender reveal parties are a capitalist scam and a violently transphobic slap in the face to African, colonized, and indigenous people – but beyond that, it is just inappropriate. We know that gender and biological ‘sex’ is not the same. We know that an infant’s genitalia at birth has no correlation to their gender, despite the previously discussed cisnormativity. The people of the Dagaaba tribe in Ghana, Burkina Faso, and Côte d’Ivoire know this; to them, gender is energetic, and not dependent at all upon sexual anatomy. If there is no definite correlation between gender and genitalia, then ‘Gender reveal party,’ is a misnomer. The child has not been born and has not had the time to explore their gender and settle into gender identity. The Igbo tribe of Nigeria does not assign gender to a child until the age of 5. Gender cannot be accurately announced at birth. What is actually being announced is which genitalia the unborn child is expected to have. Why announce this? Announcing an unborn infant’s genitalia is inappropriate at best. In a darker sense, it could even be said to be pedophilic. Sounds like some white people shit. 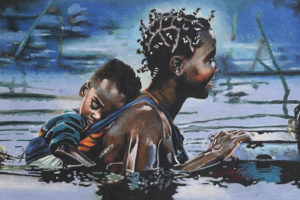 Birth is a beautiful thing, one of the most powerful forces on this earth. When we are born, it sings thousands of years of survival, blessing us with the strength and laughter and aches and triumphs and dances and pains and joys and resilience of our ancestors. In short, it is a miracle. Capitalism and colonialism have no jurisdiction over this miracle. The birth of each African, colonized, and indigenous person brings forth an abundance of power which cannot be contained by these treacherous systems. In this spirit, let us celebrate birth in all its beauty and life in all its complexities – not the gender binary. We owe it to our ancestors to decolonize the celebration of birth. 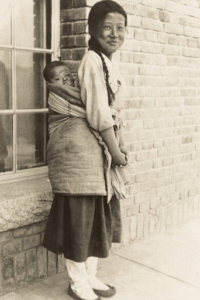 Korean mother and child during the Japanese Imperialist war