Fem Queen performance has been and will ALWAYS be one of my fave’ categories when it comes to the Ballroom scene. For those of you who have been living under a rock during the era of the FX show Pose, a fem queen is basically a transgender woman who competes in the Ballroom scene. Fem Queen Performance is a category where Fem Queens compete against each other through voguing.

The sensuality, THE HAIR! Most importantly the pure, raw, uncut creativity CANNOT be matched anywhere else! 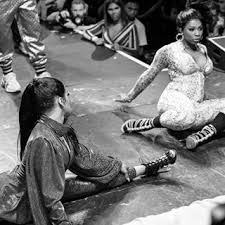 “What in the entire f*ck?” was my reaction when I was watching some recent clips of the Fem Queen Performance category at The Last Time to Shine Ball, Old School Edition, via Youtube, where this Icon, a supposed leader within the Ballroom scene, criticized and CHOPPED a young transgender woman because she was wearing padding. This clip alone has started a conversation, not only within the Ballroom scene but in the GSNA/Black Queer sector of our nation as a whole. What became overwhelmingly clear was the divide between GSNA men and African transgender women, and the disgusting, vile ideals of gender “normality” forced upon us by wyt power!

There are a few things we need to unpack. Firstly would be the origins of Ballroom culture, which began in New York City. “Cross dressing balls” had existed in the city since the 1920s, primarily open to wyt gay men. Black queer people were in these spaces, too, but rarely won any prizes cuz’ those wyt cave beasts couldn’t TAKE! Ballroom Icon, Crystal LaBeija, and her good sis, Lottie, began their own drag ball titled ‘House of LaBeija’, which in turn kickstarted the current ballroom scene in New York. These sistas are credited with founding the first House in ballroom which is the House of LaBeija! 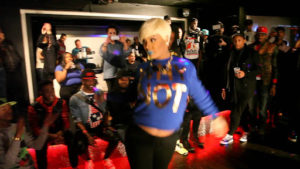 These 2 African trans women created a space for GSNA & Black Queer people to not only creatively express themselves, but to be able to earn resources, to act as a literal network for poor and displaced BLACK youths  in need of housing and food — to be a part of House families that accepted us for who we are. The importance of this cannot be understated.

The contradiction lies within the fact that many of the categories that make Ballroom what it is today are based in being accepted into the wyt corporate world. Let’s take for example the category of realness. This is a category that judges the individual on whether they’re able to “pass” within predominantly wyt spaces without being detected as “gay”. That alone speaks to this artificial need for us to be seen as equal to our oppressors.

This contradiction is expounded when it comes to the Fem Queen Performance/Realness category. The basis of the critique for this category is whether you have voluptuous breasts and a fat ass. This critique in turn has its origins in what wyt power has determined to be the attributes of  a “real” woman. There’s more that can be said to that, but this ain’t that article.

Transgender women within the Ballroom scene are then faced with the pressures of expediting their transition; going to unlicensed “back-alley doctors” to get pumped with cement and other combinations of harmful chemical substances that ultimately lead to future health conditions, or even death.

That is why this so-called Icon criticizing this young transgender woman for wearing padding is so problematic. NOBODY has the right to tell a transgender woman when and how she should transition, PERIDOT! And this doesn’t even speak to the numerous transgender women who have DIED and those who are now facing difficulties due to the same process 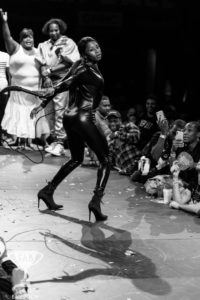 For the past 600+ years it has been wyt power which has dictated who and what a woman or a man is. We as colonized subjects have absolutely no idea of what it looks like for an individual to express themselves free of the gender normalities forced upon us by Imperialism. Of what evidence we do have, indigenous cultures have based their judgments of “women” on their contributions to the community as a whole, not on how big their breast and ass are.

We have to take back our power so that we can create a society that allows us to express ourselves in ways that we see fit!

Down with imperial gender norms!

Up with the freedom for us to decide who and what we are!