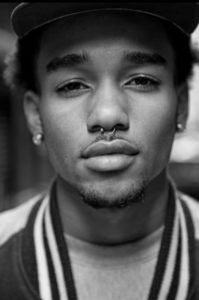 “Amani!” Damu shouts at me outside my room door.

The taps quickly turn into a loud banging.

I’m gonna kill this bitch I think angrily as I massage my temples. My eyes snap open as I stare up at the ceiling. What time is it anyway? I turn my head to look at the clock on my nightstand. 9:30. AM! Oh yea, this bitch is tripping for real!

Before Damu can start banging on my door again, I reach over the edge of my bed to grab a shoe and throw it at the door with a loud THUD!

“Damu. If you bang on my door one more time, I swear you’re about to think the revolution has begun!”, I seethe through gritted teeth as I sit up in the mess of my comforter and sheets.

“Nobody told you to have yo hoin’ ass out all damn night! Girl did you even get paid this time?”, Damu retorted with a laugh.

“Fuck you bitch!” I mumble with a smile. I knew he could instantly hear the amusement in my voice.

“That’s what I thought! I cooked breakfast! Hurry before it gets cold ya tramp!”

I continue to smile as I nestle back into my pillows but that smile slowly dissipates as last night’s events replay within my head like a movie.

I sigh. Damn it Shamir.

“Trillion!”, Shamir called from his kitchen as I laid sprawled across his king sized canopy bed in all of my glory. Shamir had a lovely apartment situated in West Columbia. District manager of the local H&M, he was doing quite well for himself.

“I want to discuss something with you.”, he said as he stood in his bedroom’s doorway. Holding two chilled shots of patron, he stood just as naked as me.

Now I know we both were definitely under the influence but I couldn’t help but notice the change in his slurred tone.

I sat up in the bed. Chillingly I knew where this conversation was headed, it was only a matter of time. Still, that didn’t stop me from admiring what I’d be experiencing for the final time.

Like a marble statue of a Zulu warrior dipped in the finest of chocolate, Shamir was blessed by Shango himself! He was a verse-top with a booty the size of two large grapefruits tied together by the strongest of rope. He preferred to top but had no qualms with bottoming for me.

Of all the brothers I’d come across, Shamir was the only one to ever make me slightly rethink my code but Trillion wasn’t here for it.

Please Oshun, please! Just tell me you got another promotion at work! You’re getting a puppy! Your mom is moving in?!

He proceeded with drunken caution as he made his way towards me as I sat on the edge of his bed. Seemingly instant, I came face to face with all of his length. So close, I could feel its warmth as the sent of his body wash came wafting into my nose.

I inhaled deeply as I took in his sent, exhaling through my mouth. He threw his head back with a moan. I look up to meet his eyes as I lick my lips then kiss his growing erection.

With a smile he made it jump. Asé!

As I grab his torso opening my mouth to receive him, he steps back. “Ant ant!” he said, grinning ear to ear as he shook his head.

I leaned back in feigned shock. He put forward the shot glass. My mind continued to race as I took it from his hand.

DAMN YOU! I screamed inside. I’m getting ready to lose the star player of my timu! And did he just call me baby?! All I could do was stare at his lips, waiting for what he would say next.

“I’ll never forget how adamant you were about not wanting a relationship when we first hooked up!”, he laughed almost to himself. We’d been seeing each other for about a month though it seemed longer.

Silently I continued to stare as I flashed a sly grin.

“I think me and you should give this relationship thing a try!” he beamed. He paused, clearly waiting for me to interject but I knew that he knew better. Patron was the definition of liquid courage.

“Before you shut me down, just hear me out!”, he stammered on, placing his shot glass on his nightstand. Too late I thought to myself as I allowed Tony! Toni! Toné’s Whatever You Want playing in the background to whisk me away.

I can remember catching bits and pieces of what he went on to say but for the most part, it all fell on deaf ears. All I could do was stare down at his beautiful toes, glancing up now and then to show some interest.

Wanting to avoid anymore awkward silence, I quickly took my shot then stood up to meet his gaze. He grinned as I gave him a Eskimo kiss. I then kissed him long and deep, him moaning into my mouth. I suckled then quickly released his bottom lip as I pulled my head back.

“What am I gonna do with you?” he sighed, kissing me quickly on the lips. Still silent, I shrugged with all the innocence I could muster. I moved to caress him from behind then gently pushed him onto the bed.

To say I made love to him like he was the last man on earth would be an understatement.

I grab my phone from my nearby dresser.

I feel a pit form in my stomach as I rub my forehead, placing the phone face down on to the bed. Why Oshun, why!? Why did he have to say it?

I wasn’t ready to give Shamir up but he used the words “me, you, and relationship” in the same sentence which was a major no no.

I don’t know how else I could say that I wasn’t looking for a relationship and as apart of my code of discretion, this was one if not the ONLY thing I made clear to the brothers I’d hook up with.

Unfortunately, some just couldn’t hang and would eventually bare to me their souls.

“Trillion baby I care about you! I’ve never felt this way about anyone before!”

“Give it a chance Trillion! I think we can make it work!”

“Damn, you really don’t want to give us a try? I’m not good enough for you?”

I was wondering how long it would take Shamir to break but damn! I didn’t expect it this soon!

I suck my teeth as I ball up my fists and slam them into the mattress. I grab my phone and open Shamir’s thread of messages. As I begin to type, the gray text bubble appears indicating that Shamir is typing as well. I immediately pause thinking to myself, wtf?

I shake the coincidence and proceed to type:

“Black Power Shamir! Sorry I left so abruptly but I did make it home! See ya round!”

With my eyes closed, I immediately reach for my phone. I slowly open them to see that he has responded with a simple:

I sigh with a fragile relief.

It doesn’t take a rocket scientist to know that there’s definitely more he wanted to say but I’m certain he didn’t want to get rejected a second time and so soon.

I shake my head and smile nervously. “Amani, you need to get your shit together!”, I say out loud as I throw my comforter and sheets back to get outta bed.

Fuck. I forgot my underwear at his place.