By joining Black Hammer, you follow in the footsteps of our ancestors by continuing the struggle for freedom and self-determination for our people!

#FreeGazi from Fayette County Jail Georgia, USA! This freedom fighter must be released as he endures immense abuse

Destroy the Colony by Destroying the Colony that has Taken Your Family.

It can sometimes be overwhelming when you understand the truth of the impact of colonialism and your responsibility when you internalize that you are...
The Gazi Strip

The following speech was given by Commander in Chief Gazi Kodzo in Rally #16 on the topic of the loneliness of the revolutionary, a...

America Hopes to Regain #1 Status by Forcing India to go to War with China!

Only Fans is on the RISE, but Sex Work is still despised!

To the idiot that thinks Young Black And Colonized folks with a media strategy is COINTELPRO!

Clash in Colorado: SDS Crakkkas, pay Reparations, and Go Back to Europe!

Black Hammer Meets with the Communist Party of Kenya

An Attack on the Revolution: The FBI Targets the Black Hammer Party
10:32

#FREEADRIUS - Donate to $BlackHammerOrg on CashApp To Release Teen Arrested For Feeding Homeless
49:41

Do you believe? The Revolutionary Church!
54:26

Dictatorship Over Your Life: Vax Truths

i am a Student of the Revolution

By Chief Amalicha, Chief of Agitation i am a student of the Revolutionfrom my first breath of life to my every waking momenti ponderwhat can...

The Children Are Dying (A Poem)

This article is written with an agenda to destroy the ability for anyone to trick you into forgetting who you are and who the...

By Comrade Ali and Chief Turey In the Southern region of the u.s., following the series of colonial killings, the Not Fucking Around Coalition (NFAC),...

By The Black Hammer Times Staff On April 20, 2020, Gazi Kodzo, the Commander-In-Chief and one of the founders of the Black Hammer Organization (BHO),...

Jesus is why you ain’t got no nigga.

Now calm down and listen to me before ya get all upset and pour holy water on my face.  Child everybody should know that I...

Is a Woman’s Body Her Own?

Amazonians Suffer Regardless: Trump VS Biden 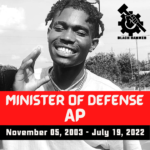 In a targeted attack by the Fayetteville Police Department, SWAT and the FBI on the headquarters of the Atlanta chapter of the Black Hammer Party, Black Hammer’s Minister of Defense, AP, was shot and killed. One of the most luminous, bright, charismatic, real, humble, and inspired young people in Atlanta and in the world, killed by the colonial state. He was 18 years old.

Homeless on the streets of Atlanta, AP joined the Black Hammer Party because he wanted to make a change for his people. As he became more politically educated, he saw how his life was interconnected with colonized people around the world and so he fought for the liberation of African, indigenous, and Asian people worldwide. As the Minister of Defense, he made sure that chapters of the Black Hammer Party were able to keep their resource distribution to the homeless as safe as possible and showed the importance of self-defense to comrades. A revolutionary leader made and in the making, he was also one of the masterminds behind Black Hammer Records—a record label to make music for the revolution to inspire our people on the streets to fight for what’s theirs and take back their lives.

Minister of Defense AP housed, clothed and fed hundreds of homeless people in Atlanta every week. He dedicated his life to his people. And the colony took that life away. But what the pigs did not take away was the power that AP gave to every person sleeping on the streets who now feels safer and more secure because of the Black Hammer Party. You can kill a revolutionary, but you can’t kill the revolution. Because of AP, the revolution runs deeper into the hearts of the people than ever before and now will only run even deeper because of the light that was stolen. Land back to all poor and working class colonized people worldwide. AP fought for that mission and that mission will continue with his memory pushing us forward! We love you twin!